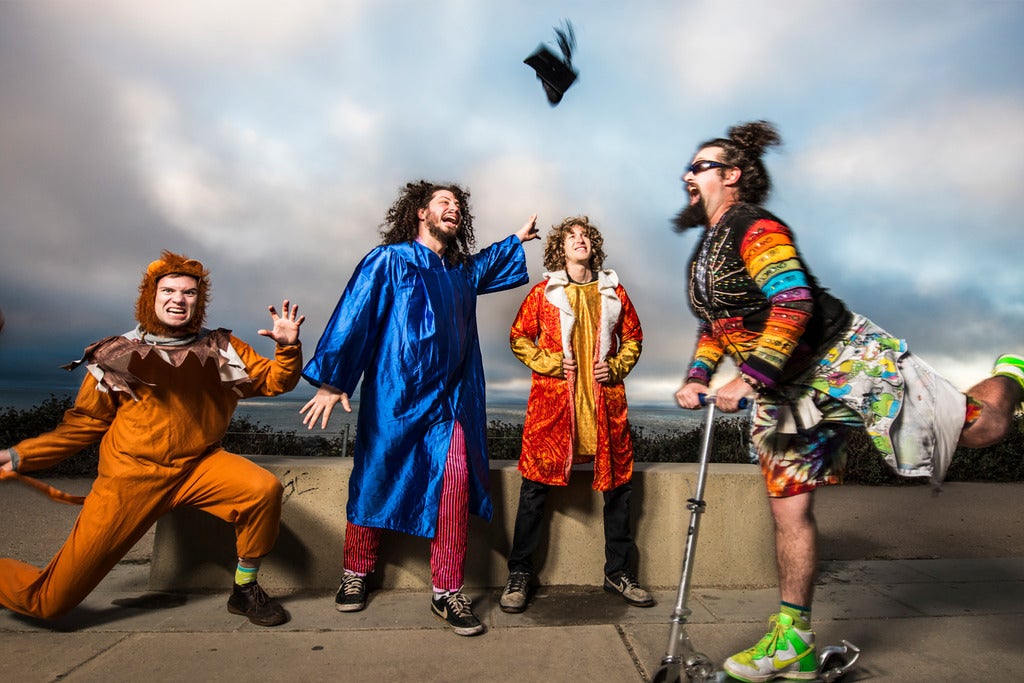 “Our fans call themselves The Flock,” says guitarist/vocalist Greg Ormont, “and they’ve created one of the biggest, most active fan communities on the internet. Everything we do is for them, so it’s been unbelievably rewarding to watch them grow with us on this amazing journey.”

Hailed as “musical explorers” by Rolling Stone, Pigeons Playing Ping Pong first took flight roughly a decade ago at the University of Maryland, and the band has since gone on to play more than a thousand shows across 44 states. Fueled by a relentless work ethic and an ecstatic sound, the fun-loving four-piece built their reputation on epic, blissed-out concerts blending infectious funk grooves with psychedelic jams and intoxicating energy. Glide called them “a band that melts faces and pulls no punches,” while Relix praised the group as “joyous” and “dance-worthy,” and Jambase described them simply as a “powerhouse.” Acting as their own independent label, the Baltimore-based quartet has released four studio albums (including their widely-acclaimed 2017 record, Pizazz) and racked up more than twenty million streams on Spotify. They’ve quickly become festival favorites, too, performing everywhere from Bonnaroo to Electric Forest to Jazz Fest and welcoming top-tier sit-ins along the way from Marcus King and Karl Denson along with members of Vulfpeck, The Revivalists, Umphrey's McGee and The String Cheese Incident among others. This fall, Pigeons Playing Ping Pong—Ormont, fellow guitarist Jeremy Schon, bassist Ben Carrey, and drummer Alex “Gator” Petropulos—will return to the road for some of their biggest headline shows yet in the run-up to their New Year’s Eve extravaganza at ExploreAsheville.com Arena in North Carolina.

“I think everything boils down to the live show for us,” says Ormont. “We really don’t hold back when it comes to sharing how happy and excited we are to be onstage, and that lets the audience know that it’s okay to show how much fun they’re having, too. We embrace the excitement and enthusiasm of our live concert experience with hopes of generating the kind of positivity we wish to see in the world all the time.”

When they’re not on the road, Pigeons Playing Ping Pong can almost always be found in their practice space or in the studio, writing and recording a near-constant flow of fresh material. The band’s explosive new single, “King Kong,” offers a sneak peek of what they’ve been up to lately, with lightspeed guitar work and funky horns anchored by a rock-solid rhythm section and wry, playful lyrics. It’s a big, bold sound for a band going big, bold places.

“We started doing this for fun in a college dorm room,” reflects Ormont. “Now we get to do it for fun in theaters and arenas across the country!”

Who knows where the fun will lead next? For Pigeons Playing Ping Pong and their Flock, the sky’s the limit.

Goose
Goose could be likened to a keg party in the woods on a summer night with all of your closest friends. While behind this bonfire-lit gathering, further into the forest, there is a deeper mystery awaiting those looking for it.

The quartet, based in Norwalk, CT, is comprised of Rick Mitarotonda (vocals, guitar), Peter Anspach (vocals, keyboards/guitar), Trevor Bass (bass), and Ben Atkind (drums). Goose’s music is the culmination of a rich history between friends of differing ages and experiences from the same small town in Connecticut, drawn together through a deep love of music and storytelling.

The band returned to the studio in 2019 for the first time since the 2016 debut LP, moon cabin, releasing two singles, “all i need” and “time to flee”�. Mastered by Grammy Award winner, Emily Lazar, the singles exhibit a developed live band showcasing their studio voice. Following breakout performances at resonance music & arts festival, domefest, summer camp music festival and the peach music festival; the Goose is loose.

Magic Beans
Magic Beans (Scott Hachey, Casey Russell, Chris Duffy and Cody Wales) have steadily built upon their national notoriety in a very short period of time with a passion for music that is as infectious as their songs. Hailing from Denver, their development has been aided by the warm hearth of the Colorado music scene, and quickly setting themselves apart from the pack as one of the state’s premier acts. Their new album, “Casino Cabaret”, is titled in homage to the vintage sign that hangs above Cervantes Masterpiece Ballroom located in the Five Points area of Denver. The venue has served as the heart beat of the Denver music scene for decades under different monikers. Its a place where the legends of jazz, soul, and funk found a common stage, and inspired the Magic Beans to craft an album capturing the different styles and genres that can be heard any given night down in Five Points. With “Casino Cabaret”, the band looks to bring the heart, the vibes, and the feelings of those Denver nights coast to coast.

Holing up in the foothills of Colorado at Scanhope Sound studios, the band looked to build upon their past studio experiences and hone in on the new sound they’ve been building since their last release. Taking the time to make these songs come to life, adding some brass to their already full sound, and dialing in the tones on analog equipment they found ways to add layers to the songs in a way not possible to achieve live. From the album opener “Here On Out” - featuring the saxophone of Clark Smith (Dynohunter), trumpet of Matt Wilkolak (Michal Menert & Big Gigantic), and rounded out by percussion from frequent collaborator, Will Trask, the band puts forward a full and accessible sound. True to form, the Beans even included some studio interludes taken from recording jam sessions to help tease those moments on the road where the band will lift off and take the songs for a ride.

With appearances in 2018 at some of the scenes marquee festivals, a stacked touring schedule and hosting their own Beanstalk Music Festival every June in Colorado, Magic Beans are poised to bust out across the scene and make waves for many years to come.

TICKETS PURCHASED FOR THE ORIGINAL APRIL 24, 2020 DATE AND RESCHEDULED JULY 23, 2020 DATE WILL BE HONORED FOR THIS EVENT.

Update from under the Dome! We checked in with the theater last night and she’s still sleeping well, resting up, and conserving all of the energy she will need for our return! Can’t wait to meet up with you all again, under the Dome that has made so much magic happen... 📸: Peter Shapiro #TheCapWillBeBack
The Cap is getting ready to celebrate #MLKDay with the African American Men of Westchester! The non-profit organization honors Dr. Martin Luther King Jr. by celebrating their 20th Annual MLK Legacy Youth Awards. This award recognizes outstanding students in Westchester who represent the spirit of Dr. King by being beacons of light in their communities and demonstrating service and leadership. We are proud to support and encourage our fans and supporters to donate! More info in link in bio. #westchester #westchesterny #africanamericanmenofwestchester
THIS SUNDAY! Bob Barsotti — The Evolution of the San Francisco Rock Industry Through the Eyes of a Bill Graham Presents Producer on SUN, JAN 17 at 2PM ET. Hosted by @JayBlakesberg. Support Bill Graham Memorial Foundation while you watch on FANS.live #photoswithstories #bobbarsotti #jayblakesberg #billgraham #billgrahammeorialfoundation
Sending a massive thank you to @senschumer for working relentlessly to pass the #SaveOurStages Act! His passion and dedication for the arts and small businesses will provide a crucial lifeline to independent venues and promoters across the country. @nivassoc @nyivassoc
#JUSTANNOUNCED! @fansbelonghere and The @relixmag Channel present The Deja Vu Experiment featuring @BillyStrings on February 18, 19, 20, 21, 23, and 24. This 6-night livestream will take place here at The Cap, which happens to be where the @GratefulDead performed the same 6 dates 50 years prior, in 1971. Get tickets now at fans.live/billystrings ⚡ #billystrings #thedejavuexperiment #fans #thecap #thecapitoltheatre #capitoltheatre #gratefuldead #thegratefuldead #grateful #thatbillystrings #sohotrightnow
Shout out to @dudewithsign for speaking the truth. Us too, us too!!
📺 Watch a rebroadcast of @trhjunior Solo Piano Set Live from The Ballroom on THU, JAN 14 at 8:30PM ET. Tune in for an intimate evening where Tom Hamilton Jr. breaks down the stories of some of his oldest Brothers Past and American Babies songs and presents them with fresh perspectives. Head to FANS.live for details. The set will also be streamed for free on Facebook and YouTube. ⚡️ #tomhamiltonjr #tomhamilton #tham #americanbabies #brotherspast #fans
RIP ⭐️ David Bowie. Five years gone but always loved, never forgotten, forever missed. #davidbowie #bowiecelebration #bowieforever
Happy birthday to one of our biggest heroes. He was the greatest man who ever fell to earth. We miss you, David Bowie! ⚡️ #davidbowie #starman
Happy birthday, Bill Graham! We are forever grateful for your devotion to the music and the magic. #Repost @garciasatthecap ・・・ Happy birthday to one of the most influential concert promoters in history, Bill Graham! Thank you for launching the careers of countless rock legends, thank you for your humanitarian spirit, thank you for bringing Santana to Woodstock, thank you for changing rock ‘n’ roll forever. Thank you for EVERYTHING!! #billgraham #billgrahampresents #jerrygarcia
We interrupt your scrolling for an important message. The Cap loves you! ❤️ 📸: @scottharrisphoto
The live music shortage in New York is causing the squirrels to go nuts! 🐿🥜
Happy and Healthy New Year to everyone!