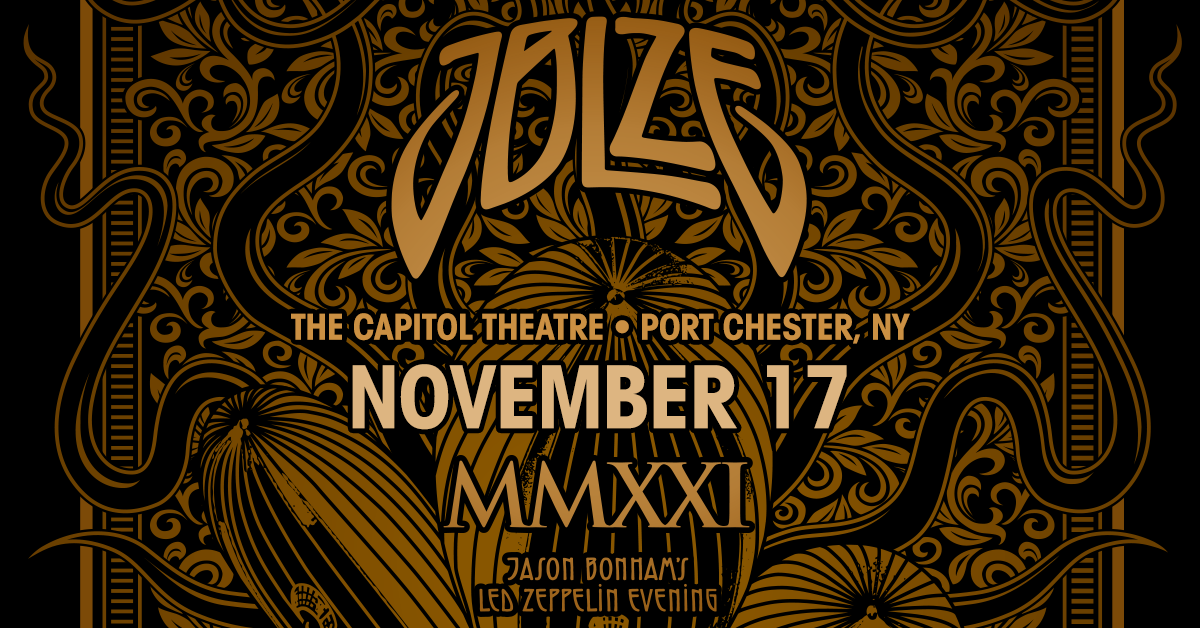 A lot of talented children have probably been asked by a parent to entertain family and friends, maybe in the living room, maybe sing a little, play an instrument. No big deal and a good way to get used to performing for others. But when Jason Bonham was a small child and got called in to entertain, the family friends he played his drums for could be anyone from Jimmy Page to some of the guys from the group BadCompany. That's what happens when your father is drummer John Bonham, one of the original members of the legendary rock band Led Zeppelin. At the age of only five, Jason could play the drums, at least a scaled-down set of them, with skill. When he was 17 he was a member of the band Air Race. The group signed a record contract with Atlantic Records, recorded one album, and opened forbig names like Queen, Meat Loaf, Ted Nugent, and AC/DC. John Bonham died in 1980, but Jason, who has marked a few places in music history himself, has stepped in from time to time to help keep his father's memory alive. In 1988, Jason took his father's spot in the televised, first-ever Led Zeppelin reunion at the Atlantic Records 40th Anniversary concert, which included Robert Plant, Jimmy Page, and John Paul Jones. Later than year. he went on to tour with Page and recorded the album Outrider with him. By 1989, he completed the album The Disregard of Timekeeping, in his new bandcalled "Bonham". One of the tracks from this first effort, "Wait for You," earned him a gold record. By 1992, with partners like Canadian vocalist Daniel MacMaster,guitarist Ian Hatton, and bassist and keyboardist John Smithson, Bonham finished another album: Mad Hatter.Jason teamed up with greats like Paul Rodgers, Slash, David Gilmour, Jeff Beck andothers in 1993 to work on a Tribute to Muddy Waters album. The record's success brought a nomination for a Grammy Award. A year later, Jason, along with Rodgers and Slash, appeared at the memorable Woodstock II. That same year, he recorded a new album, Peace 4 Me, in his group now known as Motherland with Marti Frederksen on vocals. In May 1990, Jason married Jan Charteris, in Stone, Kidderminster in a wedding reception that included a jam with Jimmy Page, Robert Plant, and John Paul Jones. Jason represented his father when Led Zeppelin was inducted into the Rock and Roll Hall of Fame in January 1995, with his sister Zoe by his side. He soon put together another solo project which culminated in "In the Name of My Father -The Zepset"cd, which featured the songs of Led Zeppelin. Proceeds from the album went to charity. The album followed up with When You See the Sun. The Healing Sixes soon caught his attention and decided to tour and record them the Indiana-based band, from 1999--2003. In 2001, Jason appeared in the film Rock Star which starred Mark Wahlberg. The band in the movie, Steel Dragon recorded the songs featured in the movie and the soundtrack. Following an album with Debbie Bonham, the younger sister of John Bonham, Jason was invited to drum for hard rock group UFO. In 2006, he also recorded with Joe Bonamassa. Jason starred with Ted Nugent, Evan Seinfeld (Biohazard), Sebastian Bach (SkidRow) and Scott Ian (Anthrax) on the VH1 reality tv show, "SuperGroup", in May 2006. The musicians formed a band called Damnocracy for the show, during which they lived in a mansion in Las Vegas for twelve days and created music. Most recently, Jason has performed and recorded with Foreigner. On December 10th, 2007, Jason played drums in the most anticipated concert of all time -the Led Zeppelin reunion at London's O2 arena with surviving members Jimmy Page, John Paul Jones and Robert Plant.

COMING UP AT THE CAP! 💥 Shows upon shows upon shows!
#CANCELLED: Due to pneumonia, The Capitol Theatre's show with Frankie Valli & The Four Seasons has been cancelled. Refunds can be obtained at the original point of purchase. Online orders via Ticketmaster will automatically be refunded. We send our love to Frankie Valli and wish him a speedy recovery. ❤️
#SHOWNOTICE! Voted Austin Music Award's "Best Hip Hop/ Rap 2020," the southern duo known as @blackillacmusic opens for @garyclarkjr at The Capitol Theatre on NOV 2 - 4. Tickets to 11/4 are officially SOLD OUT. Get your tickets for the first two shows before it's too late! #garyclarkjr #blackillac #thecap #thecapitoltheatre #capitoltheatre
Blow the horn, tap the tambourine! Happy birthday to our dear friend @BobWeir! Here we are celebrating his 69th birthday with a show at The Cap. Before the encore, the entire crowd received blue cowboy hats. Who was there? 🤠 📸: @marcmillmanphotos
@flyingembersbrew are taking over @garciasatthecap this weekend with tastings, swag, Happy Hour, and more. Get your weekend started right! #flyingembers #pigeonsplayingpingpong
Word is bond! @jasonisbell promised to put out a Georgia covers album and he's made good on that promise. The guest-filled covers album, "Georgia Blue," is here! We can't wait to welcome him back on 11/19, so make sure you grab your tickets now. #jasonisbellandthe400unit #jasonisbell #georgiablue
Show Notice: The Capitol Theatre show with @blueoctoberband on Sunday, October 17 has been moved to @garciasatthecap. We're excited to see their biggest hits re-worked to fit an intimate acoustic performance! Get your tickets at the link in bio!
@flyingembersbrew is brewed with live cultures and no culture better than the one at The Cap dancing to live music. If you’re coming to @pigeonsplaying, join us early for special Happy Hour pricing. #flyingembers #shappyhour
We've been waiting a year and a half for this moment! While it was undeniably a bummer that @pigeonsplaying had to postpone in April of 2020, the silver lining is that the Flock is finally back at The Cap. Add in opening sets from @themagicbeans and @neighbortunes, and you’ve got yourself one helluva weekend! A few tickets have just been released and will be gone in a flash, so move fast and grab yours now! #pigeonsplayingpingpong #pppp #magicbeans #neighbor #thecap #thecapitoltheatre #capitoltheatre
#CONTEST! We wanna treat one lucky person to a perfect night out with Spoon. Enter and you could win: 🎟 GA tickets to @spoontheband on 10/21 🍕Pizza and drinks at @rosinasgreenwich ✍️ Signed show cards 🌙 and an overnight stay at @thestamfordct A winner will be awarded on 10/18! Enter now the link in our bio. #spoon #thecap #thecapitoltheatre #rosinasbar #stamfordct #thestamford
Elvis Costello is back! Don’t miss @elviscostello & The Imposters at The Capitol Theatre on OCT 25 + 26. There's still time to get your ticket, but hurry, shows are coming up quick! 📸: @tischmanrocks #elviscostello #elviscostelloandtheimposters #thecap #capitoltheatre #thecapitoltheatre
It's that time of the year! 🎃🤘We have some truly amazing shows coming up! Limited tickets are available for some of these shows, so make sure you grab yours to join us. 🙌 #rocktober #thecap #thecapitoltheatre #capitoltheatre #thecapisback
TODAY IN CAP HISTORY! 24 years ago today, David Bowie sprinkled stardust on The Capitol Theatre’s stage. We miss you, Starman. You continue to inspire the world. Thank you for being our hero, forever and ever. ⚡️#davidbowie #thecap #thecapitoltheatre #capitoltheatre
Whatcha doin' Sunday night? Dust off your air guitars for an evening of rock with @blueoctoberband and special guests @yamhaus! Grab your tickets now! 🤘🎸 #blueoctober #yamhaus #thecap #thecapitoltheatre #capitoltheatre
𝙀𝙣𝙩𝙚𝙧 𝙩𝙝𝙚 𝙫𝙤𝙧𝙩𝙚𝙭 𝙬𝙞𝙩𝙝 𝙪𝙨... 🌀 Hats off to our Video Director Jonathan Healey for taking fans via the livestream on a psychedelic and electrifying musical ride. ⁣🤯✨⚡️ ⁣ If you're not at the sold-out show tonight, grab a cold one and your best buds because we’re off to the land of the Dead with Phil Lesh and his merry band of pranksters. There's still time to get a ticket to the livestream on at FANS.live #philleshandfriends #philleshquintet #thecapisback #fanslive #fans
#CONTEST! Our friends at @flyingembersbrew are giving away tix to @pigeonsplaying at The Cap on 10/15 + 10/16 plus a signed poster by the band! Winners will be announced 10/14. Enter here at the link in bio! #thecap #thecapitoltheatre #capitoltheatre
Come on out singing, I'll meet you in the merch line! 🎶 Doors open at 6PM tonight for those that want to grab merch early. If you have an Early Entry Ticket you can enter at approximately 5:45PM. Posters, hoodies, shirts, hats, oh my! Get em’ while they’re hot. #phillesh #philleshandfriends #thecapitoltheatre #thecap #thecapisback
Phil, these fans are READY for YOU! These dead-icated fans have been waiting outside since early this morning. The energy we’re feeling is incredible! If you can’t make it tonight, tune in to @fansbelonghere for the livestream. Tonight is sold out... but there's still room to join us tomorrow and Wednesday! #welcomebackphil #thecapisback #phillesh #philleshandfriends