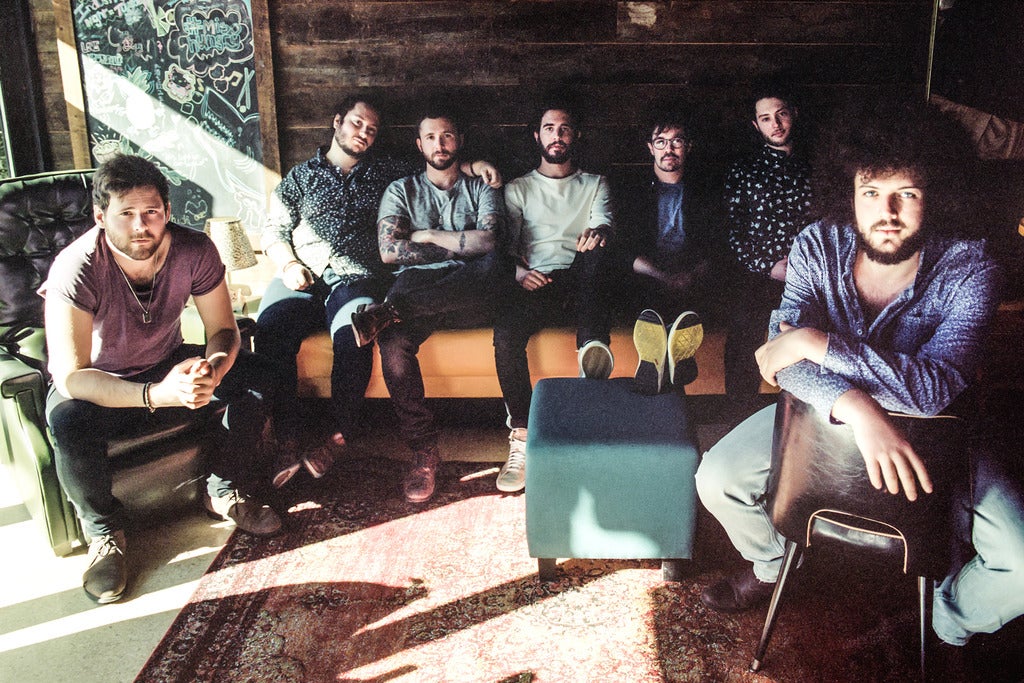 Ripe
On a primal level, we react to music through movement.

A head-nod, a foot-tap, or a handclap certainly shows appreciation, but dancing seals the eternal bond between audience and musician. Siphoning the spirits of rock, funk, R&B, jazz, and pop through a kaleidoscope of unpredictable and virtuosic improvisation, Boston-based seven-piece Ripe consistently bring people to their feet. Most importantly, they prove that “dance music” in its purest form doesn’t have to come from computers and synthesizers. It can be an unstoppable groove or an extended moment of ecstatic release. Like those bodies moving on the floor, it’s the result of the energy, friction, and communication between living and breathing people. An inimitable and indefinable chemistry has separated and singled out Ripe since day one. Subverting any and all standard genre boundaries once again, their latest offering confidently continues that tradition. These seven musical soulmates —Robbie Wulfsohn [vocals], Tory Geismar [guitar], Jon Becker [guitar], Sampson Hellerman [drums], Josh Shpak [trumpet], Calvin Barthel [trombone], and Nadav Shapira [bass]—once again incite listeners to move on their independent full-length debut, Joy In The Wild Unknown.

“What we make is music you can dance to,” affirms Robbie. “We’re drawn to the peak of a song—the emotional catharsis when everything comes out. It’s all about reaching that moment. The revelation comes back to us when bodies shake with joy.”

“Every time we play, something unique happens,” adds Jon. “You’ll never see the same show twice. We want to bring that unexpected element into the pop sphere.”

Ripe brings the swagger of funk filtered through a rock anthem, a musical journey that somehow gets as stuck in your head as your favorite pop banger.

Formed during their Berklee College of Music days in 2011, the boys have built a rabid fan base through tireless gigging and a steady stream of music. Following 2013’s Produce The Juice EP, the 2015 Hey Hello EP yielded fan favorites like “Brother Sky,” “Talk To The Moon,” and “Goon Squad,” which clocked over 1 million Spotify streams. Averaging over 100K monthly listeners on Spotify, the group landed looks from the likes of WXPN, Huffington Post, Verge Campus, Boston Globe and Hype Machine love from sites like Ear to the Ground and Indie Obsessive. Along the way, they also hit the stage at festivals such as SweetWater, Levitate, The Rock Boat, High Sierra, LaureLive, Brooklyn Comes Alive, Audiotree, and Summer Camp. The common thread would always be the translation of their individual interplay to their audience, one that Ripe views as not just fans, but old and new friends; an extended family that is rapidly growing as their sound spreads and their world deepens.

“The community is so important,” says Robbie. “We’ve got amazing fans who really show up for us. We want to integrate the camaraderie into everything we do. Now, the goal is to communicate our vision to a much wider demographic.”

Over the course of twelve songs, it finds the elusive sweet spot between jaw-dropping technicality and airtight songcraft as Ripe collectively kick off a fresh, focused, and fiery next phase.

“It took us a long time to get to this album,” Sampson admits. “It never felt right to do a full-length until now. Everything finally locked into place. Just prior, we’d been on the road for a year-and-a-half. So much was happening, growing, and changing. It was the moment to make the record.”

Ripe introduced this body of work with the simmering bass line and wild wallop of the single “Little Lighter,” which quickly shuffles into funked-up guitars and a swooning refrain—“I feel a little lighter.”

Meanwhile, finger-picked acoustic guitar and a delicate beat drive “Downward” as everything climaxes on another festival-ready chant, “This love keeps pulling me downward.”

A chorus of horns fuels “Flipside” before Robbie’s dynamic delivery instantly hypnotizes. Throughout the verses, he shares “the crazy miasma of emotional ups and downs with touring.”

Fittingly, the latter spawned the title, Joy In The Wild Unknown.

“Personally, I’m at the point where every day seems a little bit surreal, because I’m doing the thing I want to do more than anything else with my best friends,” smiles Robbie. “Music is what defines us. It’s what we get to put out into the world. I want to share this deep excitement and happiness. The phrase, ‘Joy In The Wild Unknown,’ spoke to all seven of us.”

Ripe gives the same weight to happiness as is often given to sadness. Their music signifies more than just a distraction from your troubles for a few hours - it’s an experience of connection and acceptance; a warm welcome into their world. In the end, this Joy is shared by an ever-growing community that’ll be dancing every time Ripe roll through town. It’s an extension of the bond between these seven.

“If you’ve never seen us, I want you to feel like you’ve stumbled on a real family upon introduction and get excited and curious about how to get deeper into this world,” Robbie leaves off. “It’s been about building this thing since day one. I hope you leave exhausted from dancing and feel excited to be a part of something. If you feel that way after seeing us, we’ve done our jobs.”

Melt
Founded in the Spring of 2017, Melt has quickly risen in the New York City indie scene. This seven-piece collective mixes rock with elements of RnB and Funk, creating catchy, energetic, and new performances each time they’re together. In addition to their dynamic live shows, Melt’s distinctive songwriting style fuses killer hooks with rocking jam sections and landed the band a #5 spot on Spotify’s U.S. Viral 50 chart with their song, “Sour Candy.” Now, “Sour Candy” has over two million streams on Spotify. Melt has released two more singles since (“Inside” and “Oh Brother”) and played venues and festivals across the country, including Southwest Invasion (Austin, TX), the Rhode Island Music and Arts Festival, and sold-out shows around New York City.

In 1-week on FRI, SEP 30 we'll be dancing and singing with @rickspringfield! Grab tickets now at the link in bio so you don't miss out!
We're doing our part to help solve food insecurity in Westchester County by teaming up with @feedingwestchester to collect non-perishable food items during our show with @thenational tonight and with @rickspringfield FRI, SEP 30! Place your item in the collection bin under the marquee, and let's give back to our community! #thecapcares
💥 TONIGHT! 💥 @thenational rocks a SOLD OUT show with special guest @indigosparke starting off the party! It's going to be an incredible night celebrating #CAP10 with you all! Doors: 6:30PM // Start: 8:00PM
🎟 TICKET RELEASE! 🎟 a limited number of tickets to our SOLD OUT benefit concert with @sarabareilles on THU, OCT 6 are now available! Get yours at the link in bio while you still can!
There's still a few slots left to give back to our community at @hilltophanoverfarm on FRI, SEP 23! You can earn tickets to select upcoming shows and hang out with fellow music lovers! Sign up at the link in bio and let's have some fun outside!
🎙 TONIGHT! 🎙 @sncmusic sings an evening of amazing acappella hits here at The Cap! Get your tickets now at the link in bio and come have a special night! Doors: 6:30PM // Start: 8:00PM
It's #NationalVoterRegistrationDay! The deadlines to register to vote are right around the corner and @headcountorg wants to make sure you are ready to use your voice on November 8th. Visit HeadCount.org today and make sure you're registered to vote! #VoteReady
🍎 TONIGHT! 🍎 @littlefeatofficial play "Waiting For Columbus" in its entirety, celebrating 45-years of what many consider to be rock's greatest live album! Be sure to get here for special guest @mikomarks2u kicking off the evening! Grab tickets now while you still can at the link in bio! Doors: 6:30PM // Start: 8:00PM
@sncmusic sings a night of amazing songs Acappella here this week on WED, SEP 21! Grab your tickets now at the link in bio for a special evening here at The Cap!
⚡️ SHOW NOTICE! ⚡️ @phillesh is joined by an incredible group of friends during his 9-night residency here on October 14-16, 21-23, 28, 29 + 31! Grab tickets now at the link in bio to jam to shredding guitars 🎸, thumping bass 🎵, groovy keys 🎹, and incredible horns 🎷 sections. We can't wait to party with you all!
"There is a vibe here." A big thank you to @lohud for coming out to talk with us, and to help spread the word about the incredible concerts we've put on here the past 10 years, and this fall for our #CAP10 celebration! Read the full article at the link in bio and let us know when we're we going to see you this fall!
TONIGHT! @jessiesgirlnyc plays the biggest hits from an amazing decade of music! Get your tickets online at the link in bio or at the door! Doors: 6:30PM // Start: 8:00PM
Our friends down at @citywinerynyc have some amazing shows coming up with iconic alt-rock band @officialviolentfemmes October 9-11, 13 + 14! Grab tickets at the link in bio for a special 5-night residency at a great NYC venue!
SHOW NOTICE! @johnnydepp joins @jeffbeckofficial here at The Cap on FRI, OCT 7 + SAT, OCT 8! Get your tickets at the link in bio while you can!
⛷ ON SALE NOW! ⛷ @tetongravity: Magic Hour screens at The Cap on THU, NOV 17! Grab tickets at the link in bio and come get ready to hit the slopes!
🤘 ON SALE NOW! 🤘 The Last Waltz on THU, NOV 3 + FRI, NOV 4! Get your tickets 🎫 now at the link in bio for a night celebrating one of the greatest concerts ever with an all-star line-up!
On this day 7 years ago singer, songwriter, and music legend, @jacksonbrowne rocked our theater with a night of hit song after hit song! The sheer number of legends who love The Cap never ceases to amaze us! #CAP10 #JacksonBrowne 📸: @dinopphoto