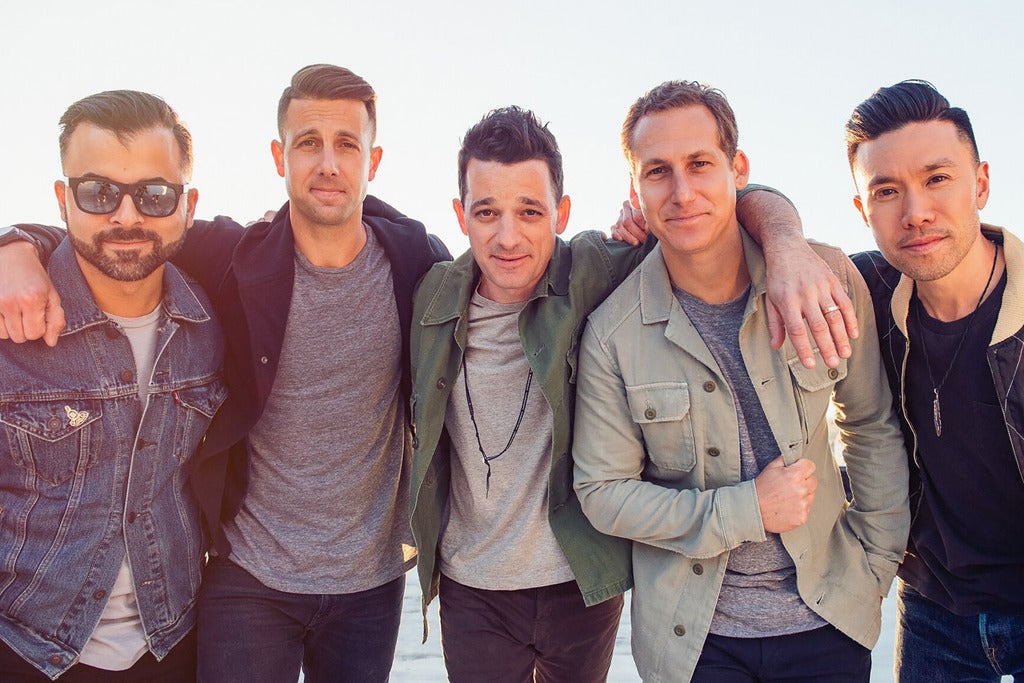 What do you call a band whose twenty year-career spans sold-out stands at both Madison Square Garden and Red Rocks Amphitheater, millions of albums sold over the course of what will be nine full-length releases, and multiple chart-busting entries? In the case of O.A.R., two simple words suffice: “The Mighty.”

Since their emergence in 1996, the musicians have tirelessly delivered a signature brand of rock steeped in alternative scope, roots tradition, and pop ambition. Among many highlights, 2008’s All Sides yielded the platinum single “Shattered” and bowed in the Top 15 of the Billboard Top 200 a space they continually occupied with King [2011] and The Rockville LP [2014].

Beyond packing arenas and amphitheaters coast to coast, they’ve given inspiring performances on The Today Show, CONAN, the 2015 Special Olympics Opening Ceremony, the ESPYS, in addition to playing their hit song “Peace” at the coveted Times Square New Year’s Eve Celebration on the eve of 2016.

“Richie Sambora announced us at Red Rocks as ‘The Mighty O.A.R.’ a few years back,” recalls DePizzo. “Those two words just stuck with us, and Marc suggested we use it as the album title. We have a great sense of pride in the career we’ve had up to this point. The term wraps up who the band is in 2019. It feels good to us.”

“Our hope is everyone leaves our show feeling better than when they got there,” says Culos. “We make that happen by playing together as a unit, playing with a pulse. Through that pulse, we tell our story. It’s about friends and family - our brotherhood. The Mighty refers to our foundation."

O.A.R. most definitely do that on their latest offering. They also tread uncharted territory. Rather than follow the same playbook and record during a set timeframe, they intermittently recorded throughout 2018, working on or writing a song only when inspired. Crafting all the songs simultaneously until the very last hours of the production deadline. In the studio, longtime producer Gregg Wattenberg would be joined by PomPom, who added a fresh take on the sound with an electronic sensibility and expanded soundscape.

“We used to rent a place for a month, go in, write music, take off for a break, and then record for another month,” says Roberge. “Thanks to Wattenberg, we now had access to a brand new studio and his guidance without the pressures of the clock. We could come and go when inspired, and fell into this comfortable experience. For the first time the schedule went out the window.”

“PomPom grew up around O.A.R. music,” DePizzo says. “To be able to bring someone into the fold who came up with your tunes and influence added a whole different perspective.”

Case in point is the first single, “Miss You All The Time.” Produced by Gregg Wattenberg and Derek Fuhrmann. Its lush keys and moving guitar riff uphold an orchestral admission, “I miss you all the time.” The emotionally charged send-off immediately resonated with fans as the official music video directed by Rudy Mancuso swiftly clocked over 5 million views on YouTube, and counting.

“Like anyone, we’ve seen tragic losses over the years,” says Roberge. “You have people in your life who are so important and influential, and then one day they’re gone. It happens quickly, and you’re left to pick up the pieces. We wanted to celebrate their greatness instead of mourn. ‘Miss You All The Time’ is a moment to honor those who aren’t with us anymore.”

Whether it’s the space and harmony of “Free”, the uplifting anthem “California”, or the addictive groove on “Knocking at Your Door,” O.A.R. ignite a bold, brilliant, and inspired next chapter.

“It’s a renewal of experiences,” says Roberge. “We’ve built the foundation, we’ve got the confidence to be who we are.”

“We’re fortunate as hell to have done this for over two decades,” Culos leaves off. “We’ve done it together. We have each other’s backs, and we’re a family. There’s a feeling of freedom in that.”

Riker Lynch, primarily known as one of the members of the band R5, is bringing trop-rock to 2019. Riker and The Beachcombers is simply a rockin’ beach party. It’s got all the feel good vibes of a great beach playlist, including reggae grooves with influences from O.A.R., McFly, The Beach Boys, and Matchbox Twenty.

Riker has attracted a very dedicated fanbase touring the world with R5 and and can also be seen playing bass for The Driver Era. “The Beachcombers is my passion music project.” says Riker. “It’s everything I love, tropical islands, the beach, good vibes, fun music, rum, tequila, pretty much anything island like and summery. I want people to feel like they’re on vacation and they just happen to get a concert while they’re there."

RIP Wes Wilson, a true pioneer who is regarded as the inventor of the psychedelic poster. Wilson is best known for designing posters for Bill Graham. He invented a style that is now synonymous with the 1960s. From Jefferson Airplane, Otis Redding, and the Grateful Dead, Wilson's designs are some of the most legendary of the era. Do you have any in your collection? #weswilson #posterart #billgraham #thefilmore #sanfrancisco
#TONIGHT! Our good friends @hollisbrown kick things off before @grouplove with their special brand of Americana and rock ‘n’ roll. We love this band so come check them out! Doors open at 6:30PM and there’s still some tickets at the door. We’re partying with @1071_thepeak all night! 🎶💥 #hollisbrown #grouplove #thepeak
#TONIGHT! ⛄️📻 @107.1ThePeak's Winter Concert Presents @GROUPLOVE! :: Doors 6:30PM // Show 8:00PM :: 18+ #grouplove #1071thepeak #thecap #capitoltheatre #thecapitoltheatre
Check out the lovely @mvonstank in our new, very limited edition 80s throwback tee. Available tonight at @jessiesgirlnyc! ✌️😘
🤣😂 #Repost @garciasatthecap ・・・ Get you a man who can do it all. #jerrygarcia
#ONSALE! 🔥🐟 If you don’t know Jorma, you don’t know Jack! 🔥🐟 Hot Tuna Acoustic and Electric plays on SAT, JUL 11 with special guest @DavidDawgGrisman Trio. Get tickets now at the link in our bio! 🎟 #hottuna #hottunaband #jormakaukonen #jakcasady #davidgrisman #davidgrismantrio #thecap #capitoltheatre #thecapitoltheatre
#ONSALE! ☠️🌹⚡️ @DarkStarOrchestra continues the Grateful Dead concert experience on FRI, MAY 8 + SAT, MAY 9. Get your tickets now! 🎟 #darkstarorchestra #gratefuldead #dso #thecap #capitoltheatre #thecapitoltheatre
#TONIGHT! 👩‍🎤💥 Rock out to the ultimate 80s tribute show with @JessiesGirlNYC! Expect hits from Cyndi Lauper, Poison, Journey, Madonna, and so many more! :: Doors 6:30PM // Show 8:00PM :: 18+ #jessiesgirl #turnbackthecap #turnbackthecap1980s #westchester #portchester #thecap #capitoltheatre #thecapitoltheatre
RIP Jim Lehrer. A true giant in journalism who remains an inspiration.
@jjgreymusic come to The Cap with @officialsoulive and @nealfrancismusic for a perfect night of soulful blues and rock ‘n’ roll on SAT, FEB 15. Grab your tickets now at the link in our bio! #jjgrey #jjgreyandmofro #soullive #nealfrancis
Tonight at @betarocks in Stamford, CT! Come crush some climbs and crack some cold ones at BETA Climbing+Fitness. Test your knowledge and you may walk away with a pair of tickets to @galacticfunknola on FRI, FEB 7 and @b.h.t.m on FRI, FEB 28! #betaclimbing
An all-star lineup featuring Steve Kimock (@kimock_official), Jeff Chimenti (@deadandcompany), @georgeporterjr, @alschnier (@moetheband), and @johnmorgankimock (@mike_gordon) will come together to honor the music of New Orleans and the Grateful Dead on THU, FEB 6. Get your tickets now! ⚜️🌹 @nolafunk #voodoodead #nolafunk #thecap #capitoltheatre #thecapitoltheatre
Happy birthday to one of our favorite guitar players, Jimmy Herring! Can we get a #WSMFP!? 📸: Dino Perrucci
That's how you celebrate Phil's 80th birthday! Love will see us through at @locknfestival in June! #lockn #lockn8 #savethedateforlockn8
#JUSTANNOUNCED! Nothing left to do but smile, smile, smile. ☠️🌹😀 We've got two nights of @DarkStarOrchestra on FRI, MAY 8 + SAT, MAY 9! On sale this FRI, JAN 24 at 12PM. More info at the link in our bio. 🔗 #darkstarorchestra #gratefuldead #thecap #capitoltheatre #thecapitoltheatre
Come pre-game Mardi Gras at The Cap! @galacticfunknola will transport us to The Big Easy with special guests @mustbejellycuz and @andersosborne + @chali_2na. Grab tickets now! #galactic #andersosborne #chali2na #anjelikajellyjoseph
An all-star band featuring Steve Kimock, Jeff Chimenti, George Porter, Jr., Al Schnier, and John Morgan Kimock come to honor the spirit of the Grateful Dead and the music of New Orleans on THU, FEB 6. Get your tickets now! ⚜💜💀 #voodoodead #stevekimock #jeffchimenti #georgeporterjr #alschnier #johnmorgankimock #gratefuldead #neworleans
If you’re a Deadhead, prove it! We’re elated by this shout-out in Netflix’s #GraceAndFrankie. ⚡️ #deadheads #gratefuldead #thegratefuldead #ifyouplanticeyouregonnaharvestwind
#JUSTANNOUNCED! An Evening With Hot Tuna Acoustic and Electric with Special Guest David Grisman Trio on SAT, JUL 11. Tickets go on sale FRI, JAN 24 at 12PM at the link in our bio. #hottuna #davidgrisman #hottunaelectric #hottunaacoustic #jackcassidy #jomakaukonen
JUSTANNOUNCED! @107.1thepeak's 16th Birthday Show ft. @lukasnelsonofficial & Promise Of The Real on SAT, APR 18. Tickets go on sale FRI, JAN 31 at 12PM at the link in our bio. #lukasnelson #lukasnelsonandpromiseofthereal #1071thepeak #thepeak
Tickets are going, going… Almost gone! Experience the hottest 1980s dance party this Friday night with @jessiesgirlnyc. Whether you’re looking for the perfect date night or an unforgettable girls night out, with this show, you can’t go wrong. Grab your tickets now! #jessiesgirlnyc #jessiesgirl #thecap #thecapitoltheatre #capitoltheatre
"Life's piano can only produce the melodies of brotherhood when it is recognized that the black keys are as basic, necessary, and beautiful as the white keys." - Martin Luther King, Jr. This #MLKDay, may we all remember to live in harmony. 🎶🎹