Since Garcia's opened as The Cap's lobby bar back in 2013, we've met and strengthened relationships with many musicians, music lovers, and Deadheads alike. Stella Blue's Band stands out among the crowd for their dedication to recreating the magic of the Grateful Dead's performances while fostering lifelong friendships fueled by the love of music and community. As they reflect on 10 years together as band, we asked them a few questions about their relationship with The Cap and Garcia's, playing with superstars like Phil Lesh and Melvin Seals, how they've evolved over the years, and some of their favorite memories in the process. Dive into their answers below and get tickets here to Stella 10: Celebrating 10 Years of Stella Blue's Band on Wednesday, November 27!  ☠️🌹⚡️

1) Stella Blue’s Band started when six musicians gathered in a basement with a mission to bring the music of the Grateful Dead to masses, while maintaining the magic of their music, filled with open jams and signature flavor. How have your interpretations of the classic songs evolved over the years as your success has accumulated?

A: The way we play particular songs has changed a little bit as band members have come and gone. Although some of us have a connection to the music from the early 70s, most of the band members are influenced by the 80s Dead. So there’s a little creative tension there that allows the band to cover a wide ground. In a lot of cases, we’ll play versions of songs that represent how they might have sounded when a particular song was a prominent part of the Dead’s repertoire. For example, if we’re doing Cryptical or The Eleven, we’ll go after that late 60s vibe and energy; if we’re playing Shakedown, it will have more of an 80s flavor when the interaction between Jerry and Brent was at its peak. What’s changed most over time is the longer the unit’s been together, the more there’s an X factor on stage --- more nonverbal communication, more talking to each other through the music, more anticipation of what the other guy is going to do spontaneously.

2) Stella Blue’s Band and Garcia’s have grown a lot together since Garcia’s opened as The Cap’s lobby bar in 2013. Just as Garcia’s evolved into a premiere rock club in Westchester with a loyal following, Stella has grown into one of the top Dead tributes in the nation with a truly Deadicated fanbase. What does it mean for the band to ring in their 10th celebrate 10 years together at one of their musical homes and what can we expect at the celebration?

A: There are always milestones in every band’s history and the month-long residency we did at Garcia’s in June of 2013 was a real turning point for the band. We played on four consecutive Wednesdays and each week the audience grew larger and more enthusiastic. Because of the people who come there, we’ve referred to Garcia’s as our “home base” or “mother ship.” Through their support, the audience has inspired us to never stop working to develop as an ensemble. In terms of what to expect, there will be a new tune or two, songs from every decade of the Dead’s history, and a second set where you won’t want to be sitting down.

3) This is not only a celebration of Stella Blue’s Band, but also a celebration of the fans that have followed you over the years. Similar to Garcia’s, Stella Blue’s Band has a track record of fostering lifelong friendships fueled by the love of live music, the Grateful Dead, and the comfort of community. Do you see the same people at every show? What is it like to have such a dedicated fanbase and how does that impact your performances?

A: It’s really incredible how loyal and supportive our fans are, both in terms of coming out to see us multiple times each month and in travelling all over the tri-state area. It’s really comforting and inspiring to see familiar faces wherever we go. It makes us feel that we part of a supportive community where musicians and fans come together to create the experience that enriches our lives so much—it really emphasizes that this music is a partnership between the audience and musicians.

4) Phil Lesh sat in with Stella Blue’s Band back in 2017. Phil has played over 80 shows at The Cap. As a band that pays tribute to the Dead, and plays a large role in the Deadhead community in the Northeast and tri-state area, how do you reflect on that performance as a milestone in itself?

A: It’s impossible to overstate how important it was for us to play with Phil. If you add up all the time we’ve spent going to shows, listening to GD music, practicing our instruments, rehearsing as a band, and actually performing, you can see that we’ve all spent a significant portion of our lives dedicated to this music. To have Phil agree to play with us indicated that he felt that we’ve reached the point as an ensemble where we could play these songs in a way that did justice to their status as lasting works of art. And to do it on the same stage that the Dead played and that they loved so much made the whole thing transcendentally unreal!

5) In addition to playing with Phil, you have multitudes of special one-off shows like playing in Central Park, appearing at the historic 50th anniversary Woodstock festival at Max Yasgur’s farm, and plenty of others. When you look back at the last 10 years, what are a few of standout memories and what do they mean to you?

A: Sharing a night of music with Melvin Seals on The Cap stage was enormously fun and inspiring. We got to play a set of JGB tunes in addition to our normal GD repertoire and we got to jam with a beautiful soul who fit right in to our thing and helped us to take the music to another level. Each time that we’ve shared the stage with someone from the larger Grateful Dead musical community--people like Jason Crosby, Jay Lane, Sunshine Becker and Kenny Brooks--extends the feeling of musical camaraderie that deepens the experience for all of us.

And then when we think about the special events that we’ve played, the ones you’ve mentioned really stand out for us. Twice playing in the bandshell in Central Park in front of 1000 joyous Deadheads as we heard the music reverberate out into NYC and beyond makes us feel part of something much larger than ourselves. And even though the phenomenon of Grateful Dead music is portable and isn’t rooted to a specific physical location, it just gives the music an extra boost when we stand on ground—such as the bandshell, The Cap stage, and Yasgur’s farm—where the Grateful Dead stood. We’re all old enough to have seen the band with Jerry many, many times, some of us going back to 1973. We lived the experience and we are trying bring that experience to people who may be too young to have been there themselves. Playing with the musicians that we have and in the locations that we have connects us to the roots of this music and helps us to better preserve it and bring it to folks who lived it themselves and to those who never had the chance.

The Central Park shows are a good example of another aspect of the band: Stella has a strong commitment to using the music for good causes. The Central Park shows have been fundraisers for Riverkeeper and we’ve donated proceeds from our shows to hurricane relief, the local soup kitchen in Port Chester, the Rex Foundation, the ACLU and others. Our annual benefit coming up in December will donate funds for hurricane relief in the Bahamas and Headcount voter registration. We just feel as a band on obligation to give back some of the gift that’s been given to us thru this music and from our fans. 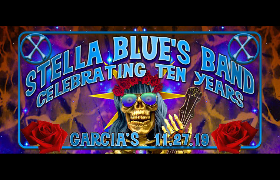