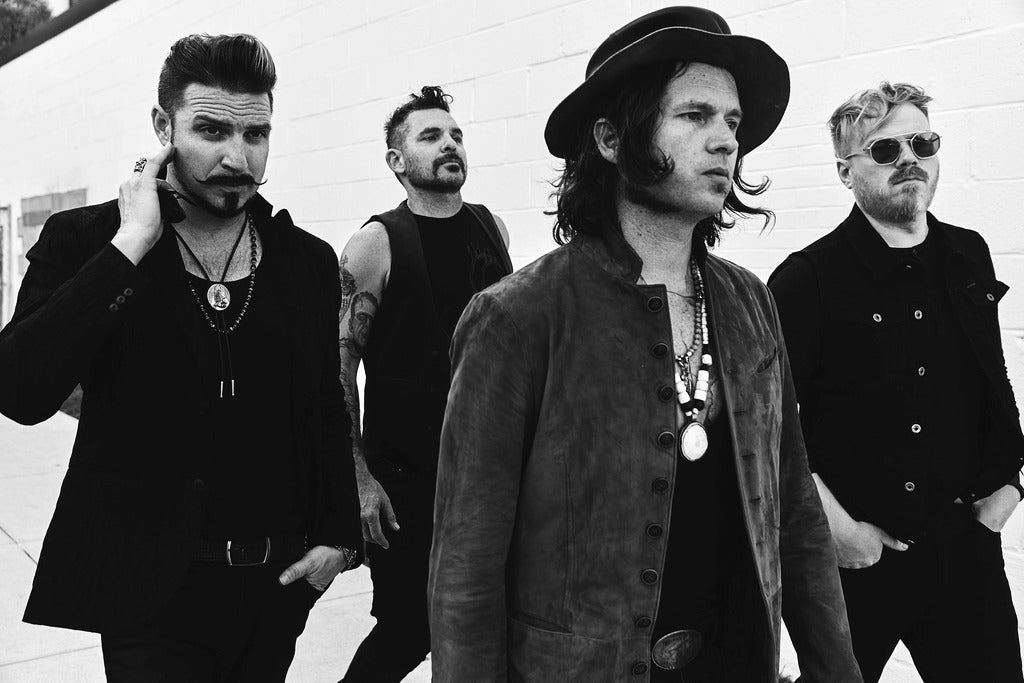 Rival Sons
2x GRAMMY-nominated group Rival Sons have announced a North American headline tour set to get underway this spring. The coast-to-coast trek will see Rival Sons joined by special guests Reignwolf, The War and Treaty, and JJ Wilde on select dates. The tour is set to kickoff April 17th at the 1,900 capacity House of Blues in Anaheim, CA, and will include stops at the legendary Ryman Theater in Nashville, TN (5/2), Huntington, NY’s Paramount (5/13), Port Chester, NY’s Capitol Theater (5/14), and more. Presale tickets for the tour will be available Wednesday, February 12th, at 10:00AM local time with public on sales starting Friday, February 14th at 10:00AM local time. For tickets and more information visit www.rivalsons.com.

Known for Jay Buchanan’s unparalleled voice, the band’s fuzzed out riffs, and bold melodies, Rival Sons have built a large and loyal fanbase through relentless touring. Buchanan recently told Rolling Stone, “Having traveled so much and played with so many different bands, I’ve been able to see that there’s a bridge between these subgenres,” and the newly announced spring dates aim to further bridge that gap with the scorched blues of Reignwolf, the southern soul of The War and Treaty, and the unapologetic grit of JJ Wilde. In addition to the spring dates, Rival Sons are also set to perform at Gasparilla Music Festival in Tampa, FL (3/17) alongside Brandi Carlisle and Portugal. The Man, as well as at Panama City Beach, FL’s Sandjam (4/24) with Weezer, White Reaper, and Strand of Oaks. Following the U.S. dates, Rival Sons will embark on a six-week European arena / stadium tour with Aerosmith.

2019 proved to be a breakout year for Rival Sons who cemented themselves at the forefront of rock and roll’s revitalization movement with a pair of nominations at the 62nd Annual Grammy Awards®. Rival Sons’ acclaimed Low Country Sound / Atlantic Records debut, FERAL ROOTS, notched a nomination for “Best Rock Album,” while their single “Too Bad” received a nomination for “Best Rock Performance.” Produced by GRAMMY Award-winner Dave Cobb at Nashville’s famed RCA Studio A, and the equally legendary Muscle Shoals Sound Studio in Muscle Shoals, AL, Rival Sons’ FERAL ROOTS is available now on all streaming platforms.

Rival Sons performed “Too Bad” earlier this year on The Late Late Show with James Corden, which Billboard applauded stating, “No fancy lights or screens, just cranked up greasy guitars, pounding drums and gargled glass vocals… with singer Jay Buchanan working the stage like he was preaching the rock gospel.” Rolling Stone declared the performance “an impassioned rendition of the bluesy, garage-inspired anthem,” adding “(‘Too Bad’) has even more fervor live.”

Comprised of Jay Buchanan (vocals), Scott Holiday (guitar), Dave Beste (bass guitar), and Mike Miley (drums), Rival Sons firt heralded FERAL ROOTS with the release of lead single “Do Your Worst,” which hit #1 at Rock Radio with. The album also features stand out singles “Shooting Stars,” “Back In The Woods,” and “Sugar On The Bone.”

51 years ago today... Santana’s groundbreaking Afro-Latin-blues-rock fusion came to The Capitol Theatre. It was two nights of blissful psychedelic jamming! 📸: Joe Sia (1970) © Wolfgang's Vault #santana #carlossantana
Record Store Day is tomorrow! 💥 Head down to @vinylstreetcafe for a chance to win tickets to @pixiesofficial on FRI, SEP 10 + @spoontheband on THU, OCT 21. Proud to celebrate and support our independent record stores! #recordstoreday
#ONSALE! Tickets to Phil Lesh & Friends on OCT 11 - 13 + OCT 18 - 20 are on sale now! 🎃👻💀 #phillesh #philoween #philsback #thecap #thecapitoltheatre #capitoltheatre
#ONSALE! Tickets to The Guitar Event of the Year: @JoeBonamassa on MON, NOV 22 are on sale now! 🎸 Grab them at the link in our bio. #joebonamassa #thecap #thecapitoltheatre #capitoltheatre #thecapisback
#ONSALE! Tickets to @107.1thepeak presents @spoontheband w/ @nicoleatkins at The Capitol Theatre on THU, OCT 21 are on sale now! 🖤 #spoon #1071thepeak #nicoleatkins #thecap #thecapitoltheatre #capitoltheatre #thecapisback
Tickets to @pixiesofficial at The Capitol Theatre on FRI, SEP 10 are on sale now! Get yours at the link in our bio.🔥 #pixies #thecap #thecapitoltheatre #capitoltheatre #thecapisback
BREAKING NEWS: @stevelacy reports that Phil Lesh is, indeed, coming to town. ⚡️#philsback #thecapisback
Heads up! Our box office is still closed and tickets for all shows remain online only at thecapitoltheatre.com. Thank you for your understanding and continued support.
What a gorgeous way to start the day! "I fell into a burning ring of fire." Beautiful shots of the “Ring of Fire” solar eclipse behind the Statue of Liberty! 🌙🗽 📸: Gary Hershorn
Heads up, merch lovin' Cap fans! Some sweet Phil-o-Ween merch is available now. Shop at the link in our bio! 🎃👻💀 #phillesh #philleshandfriends #philoween #thecap #thecapitoltheatre #capitoltheatre
Sweet deals on merch, craft beer, and free live music? Under one marquee? ✅ The Cap is the place with it all. Soak up the good vibes and great atmosphere this Saturday from 12PM - 5PM, and again on Sunday. Live music by Clare Maloney Music & Nathan De Brine.
Our friends at @brooklynbowl teamed up with @winwithfandiem to give you a chance to win the first ever Brooklyn Bowl Triple Strike Experience - 3 cities, 3 clubs, 3 shows! They’ll fly you out to each city where you’ll get a pair of VIP tix for each show, a private bowling lane, pre-show dinner, and a Brooklyn Bowl MEGA merch pack! 🎳🍗🤘 Help us empower voters around the country with your donation. Proceeds go to support @headcountorg. DONATE TO WIN at fandiem.com/brooklynbowl
Happy birthday to Derek Trucks! No one can make a guitar sing like Derek. Without question, he’s one of our favorite guitarists on the planet. ❤️ 📸: @dinopphoto #derektrucks #teseschitrucksband
A few tickets have been released to @pigeonsplaying on OCT 15 + 16. Grab 'em and let's get funky. #pppp #pigeonsplayingpingpong #magicbeans #neighbor #thecap #thecapitoltheatre #thecapisback
Here, at long last, is the moment we’ve all been waiting for! Phil Lesh returns to The Capitol Theatre for a massive 9-night celebration in October. If you're still holding on to Phil's 80th Birthday tickets from March 2020, you're in luck! Those shows are rescheduled to Phil-o-Ween, October 29 - 31. 🎃👻💀 In addition, The Capitol Theatre is announcing six Phil Lesh dates, October 11 - 13 and October 18 - 20. We are beyond grateful to our community for all your patience, love, and support during this time. We are thrilled to bring Phil back to The Cap! Tickets go on sale this Friday at 12PM ET. Here are the details regarding the rescheduled shows: Friday, March 13, 2020, tickets will be honored on Friday, October 29, 2021 Saturday, March 14, 2020, tickets will be honored on Saturday, October 30, 2021 Sunday, March 15, 2020, tickets will be honored on Sunday, October 31, 2021 If you can’t make any of the new rescheduled shows, refunds are available, but we will not be able to do exchanges. We hope you'll be able to join us! If you have any questions, please reach out to the box office at [email protected]
#JUSTANNOUNCED! Tickets to The Guitar Event of the Year: @JoeBonamassa on MON, NOV 22 go on sale this FRI at 10AM ET! 🎸 #joebonamassa #thecap #thecapitoltheatre #capitoltheatre #thecapisback
#JUSTANNOUNCED! Tickets to @107.1thepeak presents @spoontheband w/ @nicoleatkins at The Capitol Theatre on THU, OCT 21 go on sale this FRI at 10AM ET! 🖤 #spoon #1071thepeak #nicoleatkins #thecap #thecapitoltheatre #capitoltheatre #thecapisback
#JUSTANNOUNCED! Tickets to @pixiesofficial at The Capitol Theatre on FRI, SEP 10 go on sale this FRI at 10AM ET! 🔥 #pixies #thecap #thecapitoltheatre #capitoltheatre #thecapisback
Today, The Cap is giving a shout-out to Emily, our Director of Special Events! ❤️ Check out @relixmag's new merch line that benefits @womeninmusic, an impactful organization that promotes gender equality in the music industry, available now at relixmarketplace.com. #relix #womenrock #womeninmusic
The new era of The Cap begins and we couldn’t be more excited to finally reunite with our street team aka squirrel squad! Big things are happening! ❤️🐿 #CapFam #SquirrelSquad
Enjoy the beautiful weather with us at our Under the Marquee party this Sunday! 🤩 Take in some free live music from @tomclancey of @deadmeatband, cool off with a beer in @garciasatthecap, and get a deal on that merch you've always wanted. Don't miss out!
Jam the night away! 🎶 This weekend, watch @thediscobiscuits play live from @westvillebowl on JUN 4 + 5 at 6:30PM ET! Grab livestream tickets at fans.live/tdb #thediscobiscuits #discobiscuits #westvillemusicbowl⁠
Exciting news!! Cap Family Tiles are expected to be installed under the marquee by late-summer 2021. With that date fast approaching, we recommend getting your tile in time for the dedication ceremony (to be announced). Get yours at thecapitoltheatre.com/tiles! Our vision of walking up to the theater and seeing your name and favorite show engraved onto our walkway is getting closer to reality. ❤️ #thecap #thecapitoltheatre #capitoltheatre
We’re thrilled and honored to support #LoveRocksNYC benefiting @godslovenyc at the @beacontheatre tonight, featuring performances from @sarabareilles, @jonbonjovi, @joebonamassa, @garyclarkjr, and more! ❤️ It all happens at 8PM ET at fans.live #godslovewedeliver #beacontheatre #sarabareilles #jonbonjovi #bonjovi #joebonamassa #garyclarkjr #warrenhaynes #yola #fans #livestream #livemusic #nyc