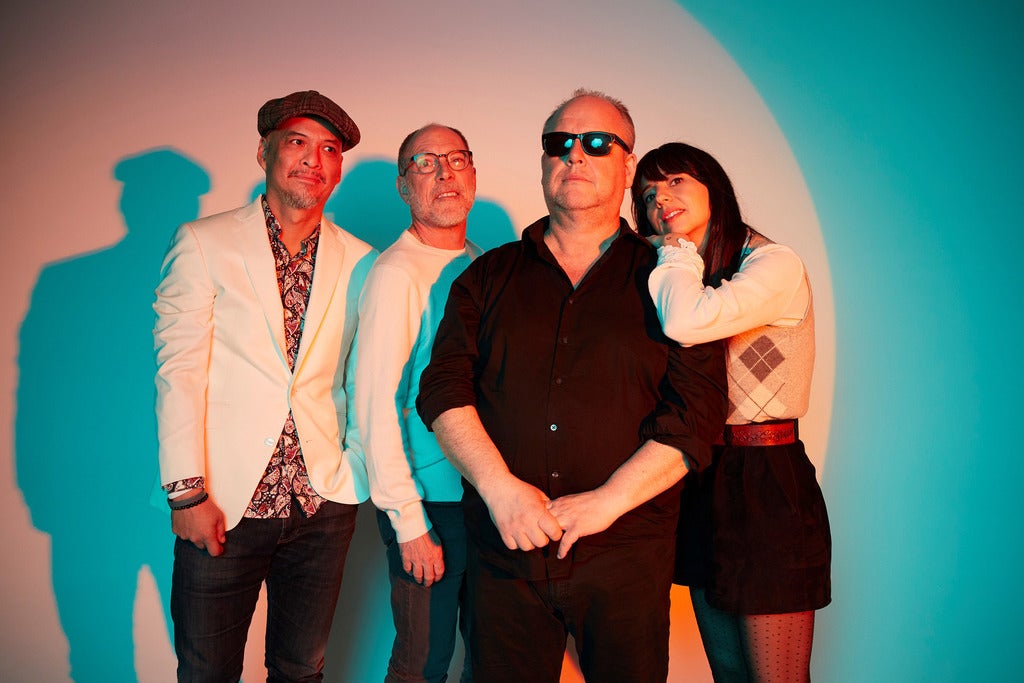 Helping to establish the alt-rock sound of the late '80s and '90s, the Pixies have become an iconic act, influencing everyone from Nirvana, to Radiohead, to Weezer with their jagged-edged indie-rock.

Formed in Boston, US in 1986, the band was formed by Charles Thompson (vocals, guitar), later changing his name to Black Francis, alongside Joey Santiago (lead guitar), David Lovering (drums) and Kim Deal (bass). After playing at various local venues, the Pixies gained a support slot for Throwing Muses, which attracted the attention of producer Gary Smith. Offering to record the band, the result was an 18-song demo, "The Purple Tape," which impressed Ivo Watts of the UK label, 4AD, with Pixies soon joining their roster.

Their debut album, "Surfer Rosa," was released in 1988, featuring the engineering talents of Steve Albini, who had helped pioneer the abrasive sound which set the standard for alternative rock subsequently in his band, Big Black. The Pixies' debut found critical acclaim across the board, gaining significant airplay and soon resulting in a record deal with Elektra Records.

Retunring to the studio, this time with Gil Norton as producer, the band created what was to be their classic album. Released in 1989, Doolittle favored a cleaner, pop-tinged sound, finding several Top Ten hits in the process, particularly finding success in Britain. After extensive touring, the band decided to take a break in 1990, hoping to replenish the band's enthusiasm.

Following solo escapades by Black Francis, they returned to the studio in 1991 for their third release, "Bossanova," which garnered mixed reviews, favoring a surf rock sound. Nonetheless, the album faired well in the charts, prompting further successful tours and festival appearances. Returning to a loud rock sound as to their earlier efforts, their fourth record, "Trompe le Monde" again found praise, resulting in further international tours before another hiatus ensued.

Black Francis, just as he was about to release his solo debut, announced that the band had disbanded, prior to his band member's knowledge of this. The members of the Pixies continued with their various other projects to moderate success, whilst still being big names in the indie rock scene. Several re-issues and archival recordings were released during the late '90s and early '00s, continuing to maintain the band's reputation and popularity, despite the hiatus.

It was not until 2003 that hopes for a Pixies reunion surfaced, reuniting in a series of tours in the US in 2004. A live DVD soon followed to much anticipation, with the band continuing to tour intermittently throughout the rest of the decade. Yet in 2013, new music arrived, self-releasing "EP1" in July that year. Two further EPs were released, with these new recordings later compiled as the album, "Indie Cindy," in April 2014.

51 years ago today... Santana’s groundbreaking Afro-Latin-blues-rock fusion came to The Capitol Theatre. It was two nights of blissful psychedelic jamming! 📸: Joe Sia (1970) © Wolfgang's Vault #santana #carlossantana
Record Store Day is tomorrow! 💥 Head down to @vinylstreetcafe for a chance to win tickets to @pixiesofficial on FRI, SEP 10 + @spoontheband on THU, OCT 21. Proud to celebrate and support our independent record stores! #recordstoreday
#ONSALE! Tickets to Phil Lesh & Friends on OCT 11 - 13 + OCT 18 - 20 are on sale now! 🎃👻💀 #phillesh #philoween #philsback #thecap #thecapitoltheatre #capitoltheatre
#ONSALE! Tickets to The Guitar Event of the Year: @JoeBonamassa on MON, NOV 22 are on sale now! 🎸 Grab them at the link in our bio. #joebonamassa #thecap #thecapitoltheatre #capitoltheatre #thecapisback
#ONSALE! Tickets to @107.1thepeak presents @spoontheband w/ @nicoleatkins at The Capitol Theatre on THU, OCT 21 are on sale now! 🖤 #spoon #1071thepeak #nicoleatkins #thecap #thecapitoltheatre #capitoltheatre #thecapisback
Tickets to @pixiesofficial at The Capitol Theatre on FRI, SEP 10 are on sale now! Get yours at the link in our bio.🔥 #pixies #thecap #thecapitoltheatre #capitoltheatre #thecapisback
BREAKING NEWS: @stevelacy reports that Phil Lesh is, indeed, coming to town. ⚡️#philsback #thecapisback
Heads up! Our box office is still closed and tickets for all shows remain online only at thecapitoltheatre.com. Thank you for your understanding and continued support.
What a gorgeous way to start the day! "I fell into a burning ring of fire." Beautiful shots of the “Ring of Fire” solar eclipse behind the Statue of Liberty! 🌙🗽 📸: Gary Hershorn
Heads up, merch lovin' Cap fans! Some sweet Phil-o-Ween merch is available now. Shop at the link in our bio! 🎃👻💀 #phillesh #philleshandfriends #philoween #thecap #thecapitoltheatre #capitoltheatre
Sweet deals on merch, craft beer, and free live music? Under one marquee? ✅ The Cap is the place with it all. Soak up the good vibes and great atmosphere this Saturday from 12PM - 5PM, and again on Sunday. Live music by Clare Maloney Music & Nathan De Brine.
Our friends at @brooklynbowl teamed up with @winwithfandiem to give you a chance to win the first ever Brooklyn Bowl Triple Strike Experience - 3 cities, 3 clubs, 3 shows! They’ll fly you out to each city where you’ll get a pair of VIP tix for each show, a private bowling lane, pre-show dinner, and a Brooklyn Bowl MEGA merch pack! 🎳🍗🤘 Help us empower voters around the country with your donation. Proceeds go to support @headcountorg. DONATE TO WIN at fandiem.com/brooklynbowl
Happy birthday to Derek Trucks! No one can make a guitar sing like Derek. Without question, he’s one of our favorite guitarists on the planet. ❤️ 📸: @dinopphoto #derektrucks #teseschitrucksband
A few tickets have been released to @pigeonsplaying on OCT 15 + 16. Grab 'em and let's get funky. #pppp #pigeonsplayingpingpong #magicbeans #neighbor #thecap #thecapitoltheatre #thecapisback
Here, at long last, is the moment we’ve all been waiting for! Phil Lesh returns to The Capitol Theatre for a massive 9-night celebration in October. If you're still holding on to Phil's 80th Birthday tickets from March 2020, you're in luck! Those shows are rescheduled to Phil-o-Ween, October 29 - 31. 🎃👻💀 In addition, The Capitol Theatre is announcing six Phil Lesh dates, October 11 - 13 and October 18 - 20. We are beyond grateful to our community for all your patience, love, and support during this time. We are thrilled to bring Phil back to The Cap! Tickets go on sale this Friday at 12PM ET. Here are the details regarding the rescheduled shows: Friday, March 13, 2020, tickets will be honored on Friday, October 29, 2021 Saturday, March 14, 2020, tickets will be honored on Saturday, October 30, 2021 Sunday, March 15, 2020, tickets will be honored on Sunday, October 31, 2021 If you can’t make any of the new rescheduled shows, refunds are available, but we will not be able to do exchanges. We hope you'll be able to join us! If you have any questions, please reach out to the box office at [email protected]
#JUSTANNOUNCED! Tickets to The Guitar Event of the Year: @JoeBonamassa on MON, NOV 22 go on sale this FRI at 10AM ET! 🎸 #joebonamassa #thecap #thecapitoltheatre #capitoltheatre #thecapisback
#JUSTANNOUNCED! Tickets to @107.1thepeak presents @spoontheband w/ @nicoleatkins at The Capitol Theatre on THU, OCT 21 go on sale this FRI at 10AM ET! 🖤 #spoon #1071thepeak #nicoleatkins #thecap #thecapitoltheatre #capitoltheatre #thecapisback
#JUSTANNOUNCED! Tickets to @pixiesofficial at The Capitol Theatre on FRI, SEP 10 go on sale this FRI at 10AM ET! 🔥 #pixies #thecap #thecapitoltheatre #capitoltheatre #thecapisback
Today, The Cap is giving a shout-out to Emily, our Director of Special Events! ❤️ Check out @relixmag's new merch line that benefits @womeninmusic, an impactful organization that promotes gender equality in the music industry, available now at relixmarketplace.com. #relix #womenrock #womeninmusic
The new era of The Cap begins and we couldn’t be more excited to finally reunite with our street team aka squirrel squad! Big things are happening! ❤️🐿 #CapFam #SquirrelSquad
Enjoy the beautiful weather with us at our Under the Marquee party this Sunday! 🤩 Take in some free live music from @tomclancey of @deadmeatband, cool off with a beer in @garciasatthecap, and get a deal on that merch you've always wanted. Don't miss out!
Jam the night away! 🎶 This weekend, watch @thediscobiscuits play live from @westvillebowl on JUN 4 + 5 at 6:30PM ET! Grab livestream tickets at fans.live/tdb #thediscobiscuits #discobiscuits #westvillemusicbowl⁠
Exciting news!! Cap Family Tiles are expected to be installed under the marquee by late-summer 2021. With that date fast approaching, we recommend getting your tile in time for the dedication ceremony (to be announced). Get yours at thecapitoltheatre.com/tiles! Our vision of walking up to the theater and seeing your name and favorite show engraved onto our walkway is getting closer to reality. ❤️ #thecap #thecapitoltheatre #capitoltheatre
We’re thrilled and honored to support #LoveRocksNYC benefiting @godslovenyc at the @beacontheatre tonight, featuring performances from @sarabareilles, @jonbonjovi, @joebonamassa, @garyclarkjr, and more! ❤️ It all happens at 8PM ET at fans.live #godslovewedeliver #beacontheatre #sarabareilles #jonbonjovi #bonjovi #joebonamassa #garyclarkjr #warrenhaynes #yola #fans #livestream #livemusic #nyc